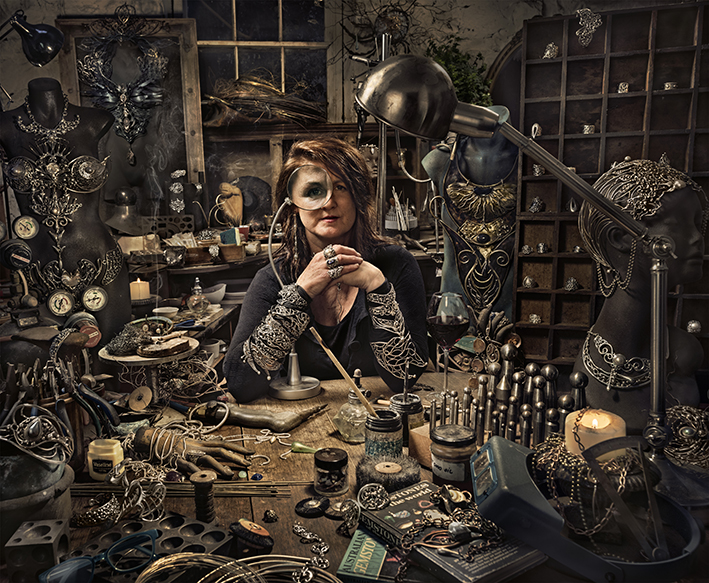 Two weeks before Victoria Edgar was to begin an Arts Degree at the University of Melbourne, fate intervened.  Searching for a course where she could learn hands-on skills, Victoria chanced upon an extraordinary display of beautifully handmade metal objects and jewellery at RMIT, and it changed the direction of her life.  Victoria immediately inquired about RMIT’s Gold and Silversmithing Course, but discovered all places had been filled. So enthusiastic was she about the course, that she talked her way into becoming the thirteenth student in a class intended for twelve. The lecturer’s decision to include Victoria in the cohort was validated, as she explains:

“After three intensive years of study and learning from some of the most skilled and prominent lecturers in Australia, I completed my diploma, winning all three student prizes and with a distinction. I was now a fully trained gold and silversmith capable of making Georg Jensen hollowware, diamond wedding rings and almost anything that could be hand made in metal.”

Victoria’s passion for jewellery making started with her mother’s jewellery collection, which was kept in an ornate box filled with pieces she had been given when she went travelling through Europe as a young debutante. To the young Victoria, it was like a treasure trove of exquisite enamel beads and faux gold filigree chains, silver and pearls and all things precious to the eye. “I spent hours rearranging, and dreaming of costumes and settings for all these fascinating pieces. Dressing up and sitting in the acorn trees that lined the leafy streets of Canterbury in Melbourne watching cars and people as they went about their busy lives.”

In the mid-eighties Victoria moved from her home on a farm in Geelong to Fitzroy in Melbourne, where she established a jewellery business called Bodiware. Her first exhibition, Aspects of Bodiware, was held in 1987, and featured her first piece of body armour, made from brass and silver, gold, copper, bronze and wings of blackened steel. From this point, Victoria’s career flourished. She has crafted pieces for the theatre and for film, and the creations she loves the most are her works of fully wearable body adornment.  A recent career highlight was the successful entry of her piece, Cascade, into WOW -- The World of Wearable Art competition in New Zealand.  Cascade is fully wearable and durable, and intricately hand fabricated from sterling silver, copper and brass, with freshwater pearls and glass drop beads.  It took hundreds of hours over six months to create, and won The Australia and South Pacific Award for Design.  Cascade is currently on permanent loan to the WOW Museum in New Zealand.

Victoria’s most recent project has been to curate an exhibition for the National Wool Museum in Geelong.  Masters – Art of the Precious Metal Object runs until 29 January 2019.