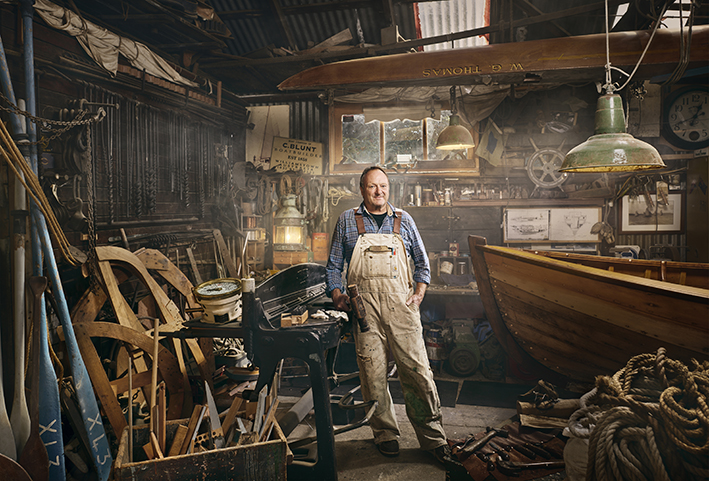 The ancient industry of shipping and boat building was the cornerstone of Hobsons Bay for generations. As early as the 1860’s, Williamstown had 13 slips for boatbuilding and pier accommodation for 40 vessels. Greg Blunt is the 5th generation of Blunts to hone his boat building craft at Williamstown’s 163-year-old C Blunt Boats.

Beginning his work life as a signwriter before completing a boat building/shipwright apprenticeship, Greg now proudly works from the current heritage-listed site repairing vessels of all shapes and sizes in the same manner his Great Grandfather Clem Blunt did in 1858.

There was a time when this enduring family business didn’t have a future. As a youngster and although he loved boats, Blunt didn’t think he wanted to work with his father as he didn’t get along with him at home. After moving out and following his own path for a while which included doing the trade in signwriting, his relationship with his father improved which inspired him to ask if he could help out with the boats.

He then worked with his father for years until the work dried up around the 1983 recession when he left to start his own signwriting business. In 1990 he went back to work at the yard, just as his father became ill and things in the business looked grim. After his father’s passing, Blunt was left to take on the affairs of the business. With the help of his wife Jo, they moved the signwriting business in, gradually began repairing the yard, signed a new 21-year lease and slowly turned the sinking ship around. It’s now been ticking along since then relying on a combination of boatbuilding and signwriting, two beautiful trades.

Recently they built a new pier and extended the lease for another 15 years. There's a succession plan in place for Greg’s son Kaden, who is a 6th generation boat builder. They say the secret to the family business is never discussing business at home, only during working hours.

“People say it’s in your blood. I don’t know about that, you either like boats or you don’t. For me with the boats, it’s a love thing, all the materials that you use, it’s like working back in another era, that’s why I stick it out. I’m 69 soon and wearing out but still loving it just as much. It’s not just me, it’s a family and a community. There’s so much satisfaction when one of these guys comes up to you and says, ‘thank you for letting me work on my boat here’. They know it’s a special place and I know it too because it’s not over commercialised. It’s exactly like it was 80 years ago with a few upgrades: lighting, bitumen and a new pier. We open to the public because people love it. Hopefully one day it could be a museum, who knows.”