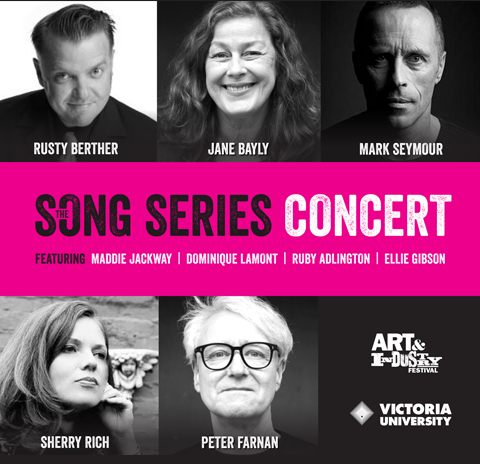 The Song Series Concert is a captivating collection of original songs and the stories behind their creation.

Song writing for the concert began in 2019 when the Art & Industry Festival, in collaboration with Victoria University (VU), invited VU music students and professional musicians to take part in a workshop series to research, write and collaborate on songs about some fascinating industries in the west.

Filmed in their own homes during the 2020 COVID stay home periods, The Song Series Concert features the Song Series musicians performing and talking about the songs they have written based on the sounds, sights and stories gathered from visits to Blunts Boat Yard, OI Glass, BAE’s Alfred Graving Dock, as well as the unique characters and events that are part of the west’s history.

With Rusty Berther (ex-Scared Weird Little Guys) and Peter Farnan (Boom Crash Opera) and a guest appearance by Mark Seymour (Hunters and Collectors), the cast of fine musicians provides a glimpse into the secret world of music-making and song writing.

Whether it’s the haunting whispers of an historic boatyard, the clinking of a glass bottle assembly line, or the vastness of a mysterious bluestone graving dock, The Song Series Concert brings rich industrial histories and unexplored stories to life through music and lyrics.

The Song Series Concert will screen online on Friday 27 November from 8:00-9:30pm.

We invite you to grab a drink, settle into your favourite chair, and be taken on an entertaining and insightful journey into the characters and places that give the western suburbs of Melbourne it’s unique history and flavour.