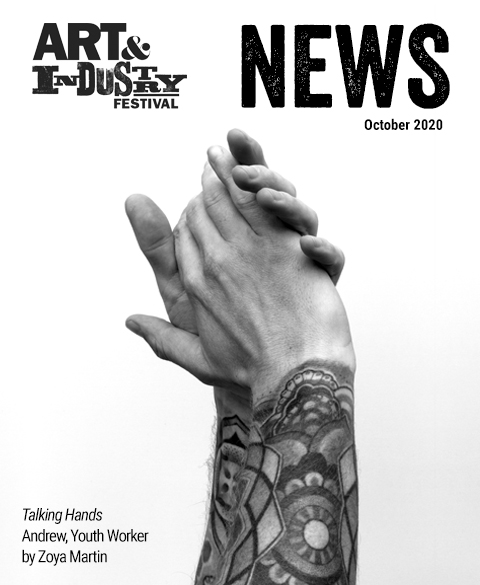 This Thursday, 29 October, we reveal the Festival’s fantastic 2020 ‘Online and in the West’ program.  Festival-goers will be able to jump onto our website to discover 10 days of design, film, stories, original music and secrets of the west!

We will also announce the line-up of our talented and dedicated artists, designers and musicians for 2020.

Read on as we introduce two of those artists, signwriter Tony Mead, and photographer Zoya Martin – plus we invite you to join us for a ‘Sneak Peek’ of a few more. 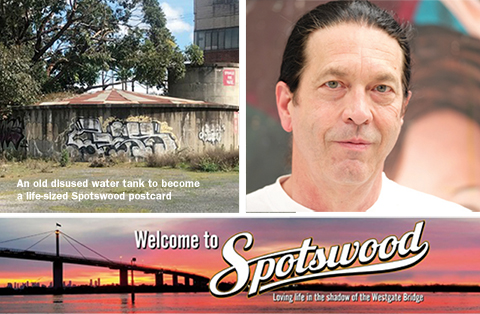 We’ll be shining the spotlight on Spotswood over the coming weeks as artisan signwriter and mural painter, Tony Mead, begins painting a huge Welcome to Spotswood postcard-inspired mural.

Tony’s mural-painting talents were showcased as part of the 2018 Festival when he painted the SAND, STEAM, SOOT, SALT in Mason Street, Newport. In 2020 Tony is taking things to an even bigger scale. This time his canvas is a large vintage water tank located on a vacant block at the corner of Hudsons Road and Booker Streets, Spotswood, near to where his signwriting business, Industrial Art Sign Co. has been based for over 20 years.

“Over time I’ve watched Spotswood changing,” says Tony. “It used to be a little backwater that nobody knew about and every time you mentioned Spotswood you had to explain where it was.

“I’ve always thought Spotswood was an interesting place. It’s got a really interesting industrial history. I like the scale of Spotswood, I like the size of all the things around us - they’re all large bridges, large tanks. I wanted to represent that somehow in a mural.”

With over 40 years’ experience as a traditional and modern signwriter, Tony’s business combines the quality, skill and craftsmanship of traditional, artisan signwriting with progressive, innovative ideas. That creative edge has led to his projects appearing in magazines and publications both locally and overseas.

Tony’s creative vision for the Welcome to Spotswood event has now inspired a short film to be made by local filmmaker Heather van Heerwaarden. The film tells the story behind the painting of the mural and one man’s impression of watching a suburb he loves change with the times. The film will feature original music by local band, The Angelicats.

The mural will be painted over October and November, so if you drive by you might just catch a glimpse of Tony in action! You can also watch its progress on Facebook or Instagram. @artandindustryfestival

The Welcome to Spotswood short film will be screened online on Saturday 21 November 7:00pm as part of the Festival’s Industrial Film Fest. Stay tuned for more details! 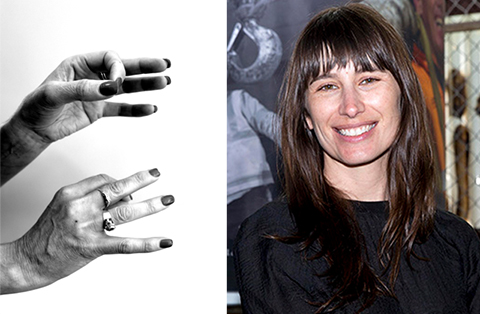 Returning for the 2020 Festival is Altona artist, Zoya Martin, with her Talking Hands exhibition.

In 2018’s Festival, Zoya’s work, Night Shift, illuminated reserves in Altona and Newport, offering a rare glimpse into the working world at night. Talking Hands also focuses on workers’ stories, through black and white photographs of their hands. A build-on from her 2016 Talking Hands exhibition, Zoya explores the skills and passion of the workers, the images and accompanying quotes telling stories of hands that build, craft and care. These stories describe how we used to work and how we work today, highlighting the diversity of occupations in the west.

With a Masters in Therapeutic Arts Practice and an Honours Degree in Graphic Design, Zoya worked as a graphic designer and an illustrator for over a decade. She now works as an Arts Therapist, utilising photography and a range of other modalities to assist others to explore their experiences.

Zoya is interested in hearing and sharing people’s stories. She seeks to create connectedness through making art with and about people. In focussing on hands as a subject, Zoya finds it encourages people to open up more easily than if she were asking them to participate in a portrait session. By asking them to think about what their hands were doing throughout their working life, her subjects are comfortable sharing personal details and stories.

“Workers recalled their experiences in a new way,” says Zoya, “sharing details that may not have been revealed otherwise. They offered their hands to be photographed unselfconsciously, and often with a sense of pride.”

Zoya has captured something unique about each person through their hand images and words, including three generations of one family that worked at Toyota. Talking Hands recognises the hard work done by people in the west in a way that honours their working lives.

Zoya’s work will also be the subject of a short film that will be screening as part of the Festival’s Industrial Film Fest event. The film will be screened online on Sunday 22 November at 7:00pm.

The exhibition will be on show from Saturday 21 November at five outdoor sites across Hobsons Bay, when we will invite you to take a self-guided Talking Hands tour. More details in our online program to be revealed 26 October.

Earlier this month we held the Festival’s first Sneak Peek with our ‘Zoom’ audience being treated to a sample of events from the upcoming program. That sample included costumes from Industrial Fashion designers and music from songwriters who have written original songs for multiple program events.

A second – Sneak Peek 2 – is planned for Saturday 7 November at 3pm. Festival Director, Donna Jackson will chat with featured artists, Tony Mead and Zoya Martin, and take a deeper dive into the inspiration and processes behind their Welcome to Spotswood mural-project, and Talking Hands exhibition.

To join us on Saturday 7 November at 3pm simply use the Zoom link below: