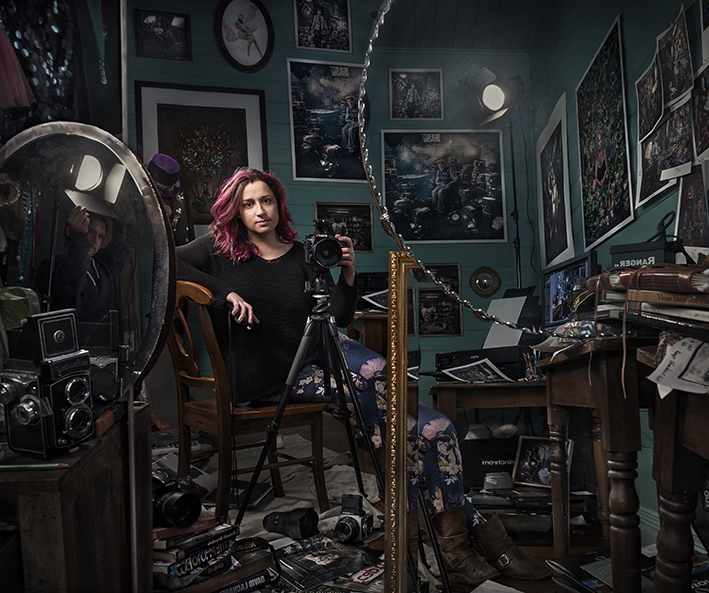 Before she became a professional photographer, Keren dabbled in fashion design. It was when she realised she preferred photographing her designs to making them, that Keren knew it was time for a rethink, and she applied to Melbourne Polytechnic to study for a Diploma in Photography. Keren has a background in the arts, with painting and drawing, and she studied photography at high school, so professional photography presented a logical way to combine the many art forms that appealed to her, in one medium.

Keren’s photography involves elements such as drawing, illustration and set design, and her naturally artistic flair assists her to create her unique images. Such is the success of Keren’s style that she was named the 2017 Professional Australian Photographer of the Year by the Australian Institute of Professional Photographers (AIPP). Photographers competing for this prestigious award submit a folio of four images; Keren entered four of the portraits she created for her I AM. series: “The Artist”, “The Filmmaker”, “The Permaculturalist”, and “The Leather Tanner”.

Keren’s images typically possess a lot of detail, and the AIPP judges noted the busy nature of her work. Keren explains: “I think that when we create images of others we can’t help but choose to illustrate part of our own story. We are creating portraits of ourselves through the people we choose to photograph. This is absolutely true for me. I am messy, I am busy, I am ‘more is more’, so by nature my work is too.” The self-portrait Keren shot for this series was a challenge for her, but she believes that self-portraiture is something that all photographers and artists should do.

When Keren decided that she would be the photographer in her I AM. series, she pondered the concept at length, and how to shoot it: “Did I want the audience to know it was me taking my own photo? Or did I not want them to know for sure? How was I going to tell my story? And what did I want in the picture?” After a discussion with a photographer friend, Keren decided to use mirrors. “It was the only way to show me in an environment the way I see myself … the best way to show me was as a reflection.”

A key factor in Keren’s work is her partner, Linton, who assists at 90% of Keren’s shoots. Keren believes that Linton’s assistance is intrinsic to the creation of her images and it was important to include him in this image.

The I AM. series is not yet complete; Keren has more ideas and more creative people to add, and eventually she plans to publish a book of the series.