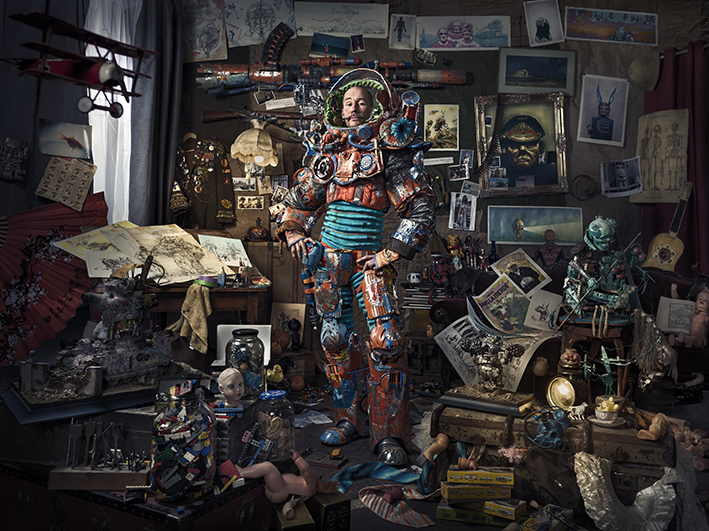 Stephen Ives’ aptitude for art was clear while he was still at high school; however, this was stymied somewhat by the expectations of the structured learning environment. Stephen’s true creativity came to the fore in his mid- to late twenties, and with the encouragement of his friends his talent reemerged.

Stephen’s talent for sculpture emerged organically: “I just made something”.  He discovered that he enjoyed creating art in three dimensions, and it fostered a sense of play in his work: “It’s just like being a kid”.

Ideas for Stephen’s works appear fully-formed in his head; he repurposes toys and a multitude of objects to create his detailed sculptures.  A recurring character in the artist’s work is his alter ego “Cloud Boy”, who wears a meticulously crafted space suit.  The ability to hide behind costumes is an attractive one to many, and Stephen believes the natural progression of his work is into the edges of performance art.

Stephen’s work has been exhibited in London, Paris, Brussels, New York, Santa Fe and Copenhagen; and has been bought by collectors in Australia, England, America and Germany as well as some of the foremost art collectors in Denmark including Christian Stadil (Hummel Sport), Lars Christian Brask (EFG International) and the Danske Bank.